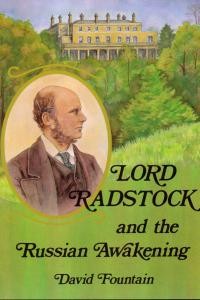 This is the remarkable account of Lord Radstock, an English nobleman (from Mayfield Park in Southampton), who was used of God to bring spiritual awakening to Russia in the 1800s.

This is highlighted by the narrative is Lord Radstock’s conversion in the Crimea, the example of Christian sacrifice and obedience, his burden for personal evangelism and his closeness to Christ.

Well illustrated and written in easy prose, it is of interest to all, from teenagers up – and tells us much about Lord Radstock, an outstanding Christian.

From the Foreword by William Waldegrave

One of the most remarkable transformations in the spiritual life of any nation of which we have record is that which took place in England during the course of the 19th century. A society rough, disorderly, often gin soaked and violent at the poorer levels; equally often morally corrupt, venal and ruthless in its richer manifestations, became by the end of the century one in which a quite astonishing change could be observed.

Terrible blemishes of poverty and of excess doubtless remained: but an extraordinary flowering of self-discipline and moral zeal had, broadly, turned the least law abiding of the great nations into a society famed for civil order, and had done it on the basis of a flowering of Christian belief and morality perhaps unparalleled in modern times.

Central to this rebirth (the benefits of which are only now, a century later sadly beginning to ebb away) was the extraordinary power of the evangelical revival, manifesting itself not only in a reaffirmation of Christianity at home and abroad, but in practical work for the poor, in campaigns against alcohol and prostitution, for prison reform, housing for the poor, and many other admirable causes.

My family mirrors this transformation in microcosm. In its Radstock branch, it produced a whole family which embodied the practical force of the evangelical upsurge of energy, with Granville Waldegrave, 3rd Baron Radstock, as its most remarkable member.

In the senior branch, from which I am descended, Regency ‘black sheep’ worthy to be the villains of Dickens or Thackeray, were succeeded in mid-century by decent and public spirited men and women strongly tinged with evangelical fervour.

I therefore think this biography, in recounting the story of a remarkable Christian, tells also an important part of the story of our nation, and indeed of the evangelical Englishmen who carried Christianity far and wide beyond our shores.

About Lord Radstock: From the author (David Fountain) at the time of publication …

For many years I have wanted to write a life of the late Lord Radstock (the 3rd Baron), whose estate I can see from my study. I learned a great deal about him from the late Mrs. Eva McGregor, who knew him personally and looked after his grandchildren at Mayfield House.

She was an invaluable source of information. I had the further privilege of receiving Lord Radstock’s own Bible (which is illustrated in the book), one of his chairs (which is in my study), together with other mementos.

Another very useful source of information is Mrs. Jean Weller. Her husband was Lord Radstock’s valet. He shared with her important details about his Lordship, which she remembered.

Lady Hersey Goring, wife of Lord Radstock’s grandson, John, who died during the Second World War, was able to supply me with obituary notices, photographs and letters. These letters included some from the Queens of Sweden and Denmark, which are included in the book. This was tremendously helpful.

While I was proceeding with the book in the Autumn of ’87, I discovered that the Radstock estate was sold to the Southampton Corporation on the death of the 4th Baron in 1937, and in 1938 it became a public park. This was opened on the 23rd June of that year by the Mayor. I was amazed that, in God’s providence, the book should be out just in time for the Jubilee of the opening of Mayfield Park to the public.

I have wanted to write about Lord Radstock, not only because he lived so near my home but because he was such a remarkable man. Very few know much about him and, of those who do, scarcely any have been aware of the extraordinary effect of his evangelistic work in Russia.

Some years ago I was told in a letter about a book written by Professor Edmund Heier, “Religious Schism in the Russian Aristocracy 1860-1900 – Radstockism and Pashkovism” (published by Martinus Nijhoff).

I simply put the letter away in the drawer that I kept for the information I was accumulating about Lord Radstock, until I had time to undertake the work. When I eventually obtained this book I was absolutely astonished.

Professor Heier has produced an amazing record of Lord Radstock’s achievements and the religious awakening in Russia. The documentation is so thorough that none would doubt the authenticity and reliability of his thesis. I want to express my deepest gratitude to Professor Heier, who has kindly allowed me to make use of his work. Copies of the publication are available from “Mayflower Christian Books”.

Sadly, Mayfield House has gone, but photographs remain. This book contains the best of them, but also a brief record of the man who lived there, with his family. His life shines out as example of the godliness and dedication to the cause of Christ. How we need such examples in these days as Lord Radstock.

Sorry this book is out of stock.