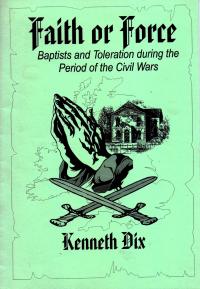 Our price: £1.00, by Kenneth Dix
Published by Mayflower Christian Books

Can it ever be right for Christians to persecute other Christians? What did the Puritans say should be the response to those who deviated from them in doctrine?

Do we need a more balanced and informed view of the Puritans and their teaching on Christian liberty?

This startling booklet will be an eye-opener to many who read it for the first time. It covers the issues of Baptists and Toleration during the period of the Civil Wars in England.

I shall never forget my introduction to the Puritans. In 1950 I attended the first Puritan Conference. It was like entering another world. These men were engaged in spiritual warfare I knew little about. The battle they were engaged in was tremendous and I was shaken and challenged.

Those early conferences were so remarkable that those of us there will never forget them. The presence of God was felt as we were conscious that we were being clearly guided into depths of doctrine and experience about which we had hitherto known little.

The contrast between their day and ours was stark. The Chairman, Dr Martin Lloyd-Jones, always made sure that vital applications were made. That was his genius, by God’s grace. After some 50 years, we have been able to learn a great deal about the Puritans, not only from conferences, but from the great number of reprints of their works.

There is a world-wide interest in these great men of God. We have a great heritage. At the same time, since God’s people are fallible, there is serious error of which they were guilty but little is known of this. This has seldom been touched upon, and is only occasionally dealt with. Even now, it is still being almost ignored. It came as a shock to me, therefore, to discover how intolerant they were.

This little volume will surprise most who read it. It is very important, however, that we recognise that it is historically accurate and contains a warning to us lest we imagine our great forefathers in the faith were infallible. It will help us to see God’s providence in the 1662 ejectment. It completely removed from God’s people any hope of imposing an unbiblical theocracy upon the nation. It also led to a period of church-building which we do well to look at more closely.

It is generally recognised that Geneva was a theocracy in Calvin’s time, and Servetus was put to death for heresy. In Luther’s Germany and Zwingli’ s Zurich, Christians were being put to death by Christians, because they were Anabaptists. It is also known, but not to the ‘same degree, that the Puritans set up a theocracy in New England.

This, however, can seem a long way from England, and certainly from the thinking and aspirations of the Puritans. They did not have the opportunity to put into effect their views of a theocracy, but got close to it. They even managed to pass a Blasphemy Bill in 1646, empowering the “punishing of a particular heretic ”with death”; but this was never carried out. Thanks to Oliver Cromwell and others, they lost the opportunity of imposing Christianity with the sword, but they tried hard to achieve this.

In Galatians 4, we read in verses 1-7 that the bondage of the Children of Israel during the time of the Old Testament theocracy was all in God’s plan. The use of compulsion and FORCE was absolutely necessary and correct, just as it is right to compel children to do certain things until they are grown up. We read in Hebrews 9: 10 of certain rituals being “imposed … until the time of reformation”. The use of FORCE was in the Divine economy during the Old Testament era.

Once the Spirit came into our hearts there was no need of external compulsion. Paul, warning the Galatians of going back to the Old Testament, said “After that FAITH is come, we are no longer under a schoolmaster” (Gal. 3:25). He also pointed out that those who were still in bondage persecuted those who were free (Gal. 4:29).

Alas, our Puritan forefathers followed the same ecclesiology that Constantine introduced, and were prepared to persecute their brethren. It is not enough to say that everyone was muddled on this point at that time. They had the New Testament and the example of the Baptists, as well as Cromwell and the Separatists to a lesser degree.

It is very easy when studying history to get an unbalanced picture. The Puritans need to be presented in a more honest way. This will also say to us that, whilst there is much to learn from them, we do not learn everything from them. We should also recognise that, whilst the Westminster Confession is valuable, it is not infallible.

In 1971, I wrote for a magazine an article entitled, “The Puritan Conference – Twenty Years in Review”. In this article I expressed my concern that the local church had been neglected in the subjects dealt with. In twenty years not one single paper dealt specifically with the local church or local churches. One paper dealt with the subject of discipline and the Puritan congregation, another with the first Congregational church, but the conference never got to grips with church life. I can only now see the reason for this. The Puritans had an unbiblical view of the church.

They were also engaged in the hopeless task of reforming the Church of England and were, therefore, not free to establish churches according to New Testament doctrine. This was left to those who had separated from the Established Church, whom they joined when they were put out in 1662. This was done magnificently by them, and more attention needs to be given to the post-1662 period.

We have looked at the Puritans for 50 years and still have more to learn from them, but their shortcomings may be an incentive to us to look at the period that followed them when far more was done than people realise, particularly in the building of churches.

Kenneth Dix has done us a real service. If any question what he is saying, or want to look further into the subject, let them read the book by W.K. Jordan he refers to in his notes. This is particularly enlightening.

It is important for us to get the great men of the past in perspective. The Baptists could see things more clearly than those who are generally regarded as being superior to them. In the battle to recover the New Testament church, the Baptists have played a vital role.