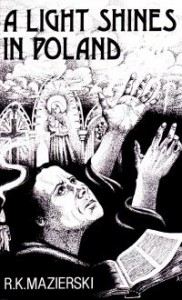 Our price: £0.95, by RK Mazierski
Published by Mayflower Christian Books

This is the true story of a Roman Catholic priest (Roman Mazierski) and of the grace of God in delivering him from the darkness of Rome in Poland.

His prolonged and intense struggle to come to faith in Christ alone is vividly described.

Roman Mazierski also gives us an absorbing account of the progress of the Reformation in Poland, that nearly made it a Protestant country.

The testimony of Rev. Mazierski was published originally by the Protestant Alliance. It was with their kind permission this edition came into being.

The second longest serving Pope in history, John Paul II, was from Mr Mazierski’s Poland. As a result there has been much interest in that country in the recent past. It will also be of great interest to know that there was a time when the Reformation had a deep influence on the country, and Gospel light spread far and wide, since it is generally believed that Poland has always been a Roman Catholic country.

Mr. Mazierski was anxious to make known the facts concerning the earlier history of his country, and we include as the second part of this booklet extracts from his own History of the Reformation in Poland.

Mr. Mazierski realised that separation from Rome was essential, though extremely costly. It is important to stress this at a time when claims are made of great movements of ‘renewal’ within that apostate body. The Holy Spirit leads His people into the light, out of the darkness.

Questions I am always asked:
“How did it happen that you have turned to the Lord and become a Protestant, after having been a Roman Catholic priest for many years? Did you read any Protestant books? Did you approach a Protestant pastor to seek his guidance? Or was it that you went to a Protestant meeting during which you became converted ?”

Protestant people ask me such questions very often, and I must give them always the same answer: “No, I never did any of those things before my conversion, simply because they are forbidden to the members of the RC Church to which I always tried to be very loyal and sincere.”

“So, how did it happen that you turned to the Lord?” they insist. I say quite frankly, I did not turn to Him, it was the Lord who turned to me, and in His infinite mercy liberated me from the spiritual captivity in which I was kept since the early days of my childhood.