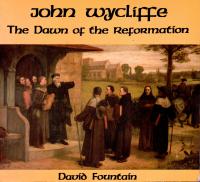 Well illustrated and in easy, modern prose, this John Wycliffe biography traces the life and work of this preacher, translator, reformer and university teacher. It takes a close look at his important influence on the 16th century Reformation in England.

The book highlights John Wycliffe’s experience of Christ, obedience to Scripture and refusal to seek the plaudits of the world. A closing chapter, his word to us, draws from his life lessons that will help us in our present situation. This is a very helpful John Wycliffe biography if you’re interested in church history, the Protestant Reformation and lessons for us today from a greatly-used Christian.

About this John Wycliffe biography
From the Foreword by David Samuel …

I am very pleased to write a foreword to David Fountain’s book on John Wycliffe, for we owe him a debt of gratitude for writing such an excellent account of that great Reformer’s life and teaching in such a readable manner, and all within the compass of the understanding of the average person who may wish to know about these important matters.

The contribution that John Wycliffe made to the Reformation in England and to the special character of English Protestantism was immense, and the author brings this out in the most effective and helpful way.

Wycliffe has not received as much attention as the other later Reformers, yet in some respects it can be argued that he was the greatest of them all. He has been termed ‘the morning star’ of the Reformation, which is a beautiful description of him, but he can with greater justice be called ‘the rising sun’ of the Reformation, for what he had to teach was integral to that great movement” of the sixteenth century.

That, however, gives rise to a question in my mind: Is the sun which rose upon our nation with Wycliffe now setting? When we consider the widespread ignorance which now prevails regarding the Bible and the general trend in the Protestant churches to neglect their doctrines and their heritage, it may seem so, and there are those who undoubtedly welcome the fading of the light. But that is all the more reason for us to seek to revive interest in this great man and to make more widely known the truth about him and the blessings to our nation which resulted from his life and work.

This book will, I am sure, contribute in a large measure to this and will encourage us to remember these important things:

This book will do much to strengthen the cause of true religion and preserve among us the light that began to shine again upon our nation with that great man of God, John Wycliffe, over 600 years ago.

About this John Wycliffe biography
From the Author’s Preface …

I cannot recall exactly when I first became interested in John Wycliffe, but it must have been before I went to Oxford to read history. The late Professor K.B. MacFarlane, fellow of Merton College (an authority on Wycliffe), was giving a series of lectures on Wycliffe and the Lollards.

Such was my interest, even before hearing him, that I attended these, although they were not on my course. I still have the lecture notes, written 30 years ago!

Since that time I have collected quite a number of volumes on the subject. I was especially pleased to obtain Vaughan’s two volumes on the life of Wycliffe, as they are almost unobtainable and extremely useful.

In 1968 I was asked to deliver a lecture on Wycliffe at the Conference of “Puritan and Reformed Studies” at Westminster Chapel.

This gave me an opportunity to go into the subject in depth, and visit the British Museum. Since then I have collected more material, and have been waiting for the 600th anniversary of his death. There have been very many books written about him, though most of them during the nineteenth or early twentieth century. I have sought to glean from them what I felt was of most value and interest.

I have not gone into the many different ways of spelling his name, or which of the many paintings of him is most likely to be accurate. Neither have I dealt with social events of his day that strictly speaking have no bearing on the theme. A bibliography of those books that I have found most helpful appears at the end of the book.

There are many things that could be said about John Wycliffe – a man who has had more biographies written of him than any other medieval person. As pastor of a local church I have endeavoured to deal with matters that are not only interesting and edifying, but of particular relevance today.

It has not been an easy task to avoid the danger of being too academic and boring the reader, or being too popular and losing credibility. I have quoted a great deal from Wycliffe because he speaks so well for himself, and from others because some of my assertions may take the reader by surprise and I have felt the need for the support of those whose scholarship is beyond question.

John Wycliffe was truly a great man by any standard. God has given England few such men. I trust the reader will come to the same conclusion and be profoundly grateful for this man.

Mayflower Classics: John Wycliffe biography – The Dawn Of The Reformation