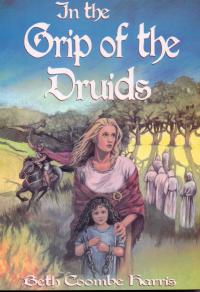 This is a gripping story giving a picture of life in the 2nd century under the druids in a world of child sacrifice and dominance by the priests.

It also shows how Christianity and the Gospel brought true liberation to many in Roman Briton. The book is ideal for readers aged 10+.

More about In the Grip of the Druids …

Venissa was a carefree girl who lived in 150AD, when ancient Britain was largely inhabited by Celts. The untouched beauty of the Devon countryside, the simple way pf life, was spoiled by the fear instilled by the Druids – medicine men, scribes and spiritual tyrants of the day.

Pagan rites and ritual, human sacrifice, and cruelty made Venissa and Alaric question the only religion that they had ever known. But one day, a stranger came into the village to change all that. His message was one of freedom from the chains that bound their hearts.

He told them of the love of God and the forgiveness of sins. How could this be?

Many welcomed this new “religion” with eager arms, but not all were pleased about the story-teller and his message – nor were they willing to release their grip of power without revenge.

Although the story is fiction and was written over 50 years ago, it is as fresh and exciting as if it were written yesterday. It is based on careful research and true Biblical experience.

Nearly 2,000 years ago the gospel came to Britain with great power, as it did to every part of the Roman Empire. The experience of men and women, young and old, has not changed. The power of sin, and the greater power of the gospel, are still the same today.

In the Grip of the Druids … Foreword from the Publishers

When Beth Coombe Harris wrote “In the Grip of the Druids” over 50 years ago, there was not the same ‘great interest in the Druids that exists today. Currently, there is a growing fascination with the ideas and behaviour of our pre-Christian Celtic ancestors, especially in view of ‘New Age’ thinking.

The practice of human sacrifice is an integral part of our story. And it is possible that this issue may be challenged. However, the publishers are satisfied that material available justifies this aspect of the story.

We are particularly grateful to the late Stephen Jack, M.A., of Catshill, near Bromsgrove, for his thorough investigation of the religion and practice of the Druids. He was able to establish clearly the validity of the views and practices of the Druids as set forth by Beth Coombe Harris.

Having read the relevant authorities, and having made contact with the British Museum, Stephen Jack has furnished the publishers with all the material they needed to vindicate this aspect of the story. “The Lindow man – the Body in the Bog“, published by the British Museum in 1986, by Stead, Bourke and Brothwell, is particularly helpful.

Dr. I.M. Stead is Deputy Keeper of the Department of Prehistoric and Romano/British Antiquities, British Museum; Don Brothwell is Reader in Zoo Archaeology at the Institute of Archaeology, London; and J.R Bourke is in the Department of Surgery, University Hospital, Nottingham. They have all concluded that the famous ‘bog-man’ was not mugged but the subject of a ritual killing.

Stephen Jack also referred to other authorities at length, to the complete satisfaction of the publishers.

Beth Coombe Harris’ accuracy in the matter of human sacrifice, as well as background detail, is particularly well seen in her description of the horrific ”wicker man” in Chapter 24. Here, she describes the cage shaped like a human figure in which prisoners were sacrificed by being burnt alive. This appalling practice is well documented.

Some may object to the presentation of history by means of a fictitious story line, here in In the Grip of the Druids. This is not without precedent, and can be used to bring home the reality of events long-forgotten.

Others may object to the use of fiction to convey Christian truth. We need to remember the example of Scripture where fiction is used by means of parables.

Bunyan’s “Pilgrim’s Progress” is seldom criticised because it was an allegory. The description of Hopeful’s conversion in his discussion with Christian is purely fictitious but it is so Biblical in the concept of the whole experience that it comes across with reality and force. Some Christian fiction is so ‘romantic’ that it raises justifiable objections, but Beth Coombe Harris takes her story through human and Christian experience in such a way that it is credible.

It is a sad fact that there is so little ‘easy’ reading that is not superficial in a spiritual sense. We should not always have to choose ‘heavy’ reading in order to be edified. Great efforts are made by the media to entertain us, and so it is easy for the Christian to neglect weighty matters because they are couched in heavy forms.

It is good to have a text that is both easy to read and profitable. We are grateful to Paul Lewis, Pastor of Welcome Hall Evangelical Church, Catshill, for his Foreword to In the Grip of the Druids.

In this historical novel Beth Coombe Harris uses her careful research and knowledge of Christian experience to bring to life the undoubted triumph of the Gospel over paganism nearly 2,000 years ago.

A book like this can be an encouragement to us in these days when pagan darkness is reasserting itself. We pray that this may be so.