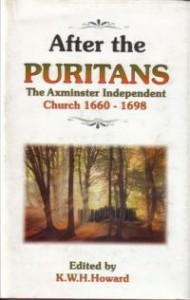 Our price: £2.50, by KWH Howard
Published by Mayflower Christian Books

This book sheds light on what happened in those years between the Puritans (1662) and the Methodists (1737), using as an example of God’s blessing amidst hardship and suffering the story of Axminster Independent Church.

Some historians consider the time following the Puritans to be the finest spiritual period in our history. And yet few people are aware of this.

This has usually been portrayed as a time of spiritual stagnation and decline among Nonconformity as well as the Church of England. This is far from the case among Dissenters (except with the Presbyterians, and then only during the latter part of the period). Older historians and recent research testify to the real blessing during this time.

After the Puritans … this story of Axminster Independent Church gives us a wonderful insight.

Reading what happened after the Puritans is like entering another world. The Lord’s people at Axminster (1660-1698) suffered enormously and faced great danger. However the way they met secretly and were preserved and blessed with the presence of the Lord is outstanding. They wanted to record God’s kindness to them – to benefit future generations.

Their determination to meet together, come what may, shows how highly they valued true Biblical worship. The great attraction to them was the presence of Christ. They knew that His dwelling place on earth was in the local church. The sufferings they faced and the blessings they enjoyed are recorded for us. They were truly devoted to the Lord and to each other.

Here, in After the Puritans, we have a detailed ‘role model’ for a local church. And while other churches declined spiritually, the Axminister congregation kept on the right path. This was also true of the Independents and Baptists, in the West Country as a whole, while the Presbyterians were later engulfed in Unitarianism. The spiritual building was well founded since it lasted at least a century after the period described in this account.

The believers at Axminster Independent Church recorded their story because they believed it was Scriptural to tell of the Lord’s dealings with them. They called the account “Ecclesiastica” or “Book of Remembrance” and quoted Numbers 33:2: “And Moses wrote their goings out according to their journeys by the commandment of the Lord”.

Psalm 102:18 says: “It shall be written for the generation to come: and the people which shall be created shall praise the Lord”.

In this book they say: “The works of God are all worthy to be remembered but especially His work in building and preserving His churches. His Providences towards them are His masterpieces which deserved to be observed most seriously and to be had in everlasting remembrance. Hereby not only the present but the future generations may be excited to praise the Lord when they shall see a series of His mercies in a register”.

When the book was first published in 1874 it was introduced in the following way: “There are certain respects in which this Axminster Ecclesiastica is one of the most interesting, relating to the origin and history of the Free Churches in England that has ever been printed.”