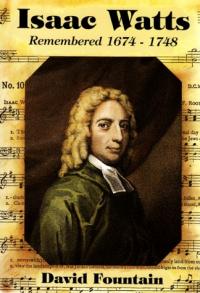 Isaac Watts Remembered is the official biography of this famous hymn-writer, commissioned by the City of Southampton (his home city) to mark the 300th anniversary of his birth.

His official biographer for this book is David Fountain, also a non-conformist pastor in the city.

Isaac Watts Remembered is a warm and revealing story of the life of a Godly man who has been described as the father of English hymnody.

“Isaac Watts was not an innovator but a reformer and anxious to take people back to the New Testament,” said biographer David Fountain after finishing the book.

“His hymns are closer to Scripture than those of any other hymn-writer. I believe he influenced the worship of God more than anyone in history.”

Isaac Watts wrote 700 classic hymns (as well as famous poems such as The Sluggard) and a top 20 selection of his psalms and hymns are included in the biography.

This Isaac Watts biography also mentions the contribution of Watts to education at a time when little had been written for children.

His Divine and Moral Songs for the use of Children were highly valued and it is estimated that, in total over the years, seven million copies have been sold. This had a terrific influence on Sunday Schools in particular.

Illustrated by sketches, historical drawings and photos of landmarks today, Isaac Watts Remembered takes the reader back to his early years.

The book follows days in prison during the days of religious intolerance, as well as his education, time at college and his dedication as a preacher, evangelist and hymn-writer.

Readers are also given an insight into Watts the man. You can read about the love of his life, his close friend, Elizabeth Singer, as well as his trials, conflicts and ill health.

Relationships with his peers in the Christian world, such as George Whitfield, are also examined.

Note: We also have a great companion book to go with this title. See Hymns And Spiritual Songs by Isaac Watts which has a selection of 50 of his hymns and songs.