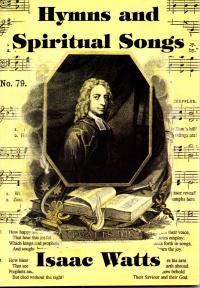 Our price: £1.00, by Isaac Watts
Published by Mayflower Christian Books

This compact book features a selection of 50 lesser-known Isaac Watts hymns from his own collection of Hymns and Spiritual Songs.

Many hymns included are little known and yet are excellent summaries of Christian experience and doctrine, ideal for meditating upon.

The book of Isaac Watts hymns was published in 1998 to mark the 250th anniversary of the death of Watts.

It is quite apparent that his desire was to draw attention to God and to do this in a spiritual and devoutly natural way. In his hymns he succeeds in doing this and indeed our hearts and souls are inspired and gladdened in the singing of them.

We live in times when there has been a terrible change in the worship of God. Instead of our worship, and particularly our hymns, being God-centred they have become man-centred, This change has led us on a downward path, deceiving many into thinking that it is necessary to compromise in order to attract. Are we forgetting the sovereignty of God, and that His arm is not shortened that it cannot save?

It is necessary in every aspect of our Christian faith and our living to have God and His glory in view. A good work is a lasting work and a good spiritual hymn is a benediction for generations in the Christian Church. What a joy it would be to see the restoration of the worship of God.

It was Joseph Hart who wrote:
True religion’s more than notion,
Something must be known and felt.

Isaac Watts’ greatest hymn is also his most well known and points to our Saviour and our God:

When I survey the wondrous cross
On which the Prince of Glory died
My richest gain I count but loss,
And pour contempt on all my pride.

Let us return to survey the truths of the Gospel and the person of our great God, and we would never wander from these good and tried ways.

From the Introduction to this collection of Isaac Watts hymns …

The City has a particular interest in Isaac Watts because he was not only born in the town but composed his first hymn for one of the Dissenting Meeting Houses there in 1694.

The story goes that one day, after returning from the meeting, Isaac complained about the general poverty of the Psalmody, which he said was entirely wanting in the dignity and beauty that should characterise every part of Christian service. “Try then”, said his father, “whether you can produce something better”.

This was in response to his brother Enoch’s suggestion that he should commit his hymns to print. It was followed later, in 1719, by his “The Psalms of David Imitated”.

The full account of his life and times and hymn writing is given in “Isaac Watts Remembered“, by David Fountain. This was written at the request of the Entertainments and Publicity Department of Southampton City Council in 1974 as part of the celebrations of his birth, and has a Foreword by the late Lord Maybray-King, former Speaker of the House of Commons.

The third edition was published to coincide with the 250th anniversary of his death, and is still obtainable from bookshops, or from Mayflower Christian Books, who also publish this edition of his hymns.

The following hymns have been selected from his “Hymns and Spiritual Songs” (1707). These particular ones have been chosen because of their excellence and the fact that few are in print today. Twenty-five have been taken from Book 1 and twenty-five from Book 2.

The object of this publication of Isaac Watts hymns is not simply to celebrate the anniversary of the death of the great hymn-writer but to draw attention to the quality of worship 250 years ago.

These Isaac Watts hymns reflect the experience of God that was so real in those days, and contrast markedly with so much that is man-centred and approaching entertainment in contemporary worship.

Readers who are familiar with Bunyan’s “Pilgrim’s Progress” will remember how much attention was given in those days to the place of Heaven in the minds of God’s people. This emphasis on the life to come is particularly strong in Watts’ hymns. The living experience of the Christian in his relationship to his Saviour is clearly uppermost.

These Isaac Watts hymns can be of great benefit not only in the singing of them, but in meditation. A tune has been recommended for each one.

It is the desire of the publishers that the readers, like so many in the past, will be assisted in their approach to our great and glorious God by the use of these Isaac Watts hymns, written so long ago but rich in true spiritual worship.